CLARK COUNTY — Dire predictions of a post-pandemic state budget collapse for Washington have largely not come to pass, thanks to a quicker-than-expected economic recovery, and billions of dollars in federal stimulus money.

Washington received nearly $3 billion as part of the CARES Act stimulus package approved by Congress in March 2020, and is expected to receive well over twice that amount from the $2.2 trillion American Rescue Plan.

Even with all of the additional money forecasted to flow into the state, some officials warn transportation funding is in need of a cash infusion and are proposing a host of new transportation related taxes. (See Title Only Transportation bill here.) Legislators have proposed a plethora of new and increased taxes to raise money for transportation projects.

This is largely due to state law, which restricts transportation funding revenue to gas taxes, tolls, and vehicle sales taxes, as well as licensing and registration fees, all of which have taken a hit during the pandemic.

That same March revenue forecast estimated approximately $669 million in transportation revenue was lost this budget cycle due to stay-at-home orders during the pandemic. Another $454 million is expected to be lost in the coming budget cycle.

A proposed $2 trillion infrastructure spending plan being proposed by the Biden administration could offset those losses, but it remains to be seen how quickly any such massive spending plan, and the attending tax increases necessary to pay for it, could get through a heavily divided federal legislative branch.

Yet the Kitsap Sun reports “the latest round of federal coronavirus relief, the $1.9 trillion American Rescue Plan, will send an additional $11 billion into Washington’s economy on top of previous federal relief efforts, including $4.25 billion for state government.”

The second round of federal COVID relief funds is different according to Rep. Andrew Barkis (Republican, 2nd District), who sits on the House Transportation Committee. He says the legislature must appropriate it, as it has restrictions and conditions. The federal transportation funds are a backstop against revenue shortfalls caused by COVID. Those include lower gas tax revenues, lower tolls, and lower fares on the state ferry system.

Many legislators have suggested using the latest round of federal funds for much-needed, one time fixes to projects like repairing roads and bridges, and addressing the fish culvert issue mandated by the state Supreme Court.

“The operating budget has plenty of money,” said Barkis. “There is so much money flowing into the state, we don’t need to be talking about more (tax) money.”

This all explains why two proposed transportation packages, one in the state House and the other in the Senate, include a list of proposed tax and fee increases, even in a period of relatively robust economic growth.

At a Southwest Washington Regional Transportation Council (RTC) meeting last week, Director Matt Ransom said he has no clear sense yet about whether either plan, or some combination of the two, will get done before the legislature adjourns on April 25, assuming a special session isn’t called.

“May be tough to do that in three weeks,” is what Ransom said he’s hearing from lobbyists in Olympia representing the various transportation agencies and municipalities. “There’s speculation of a special session or just that this is one step this session, and they bring it back for the shorter session next year and actually deal with it as a standalone proposal.”

The Senate plan, dubbed “Forward Washington” was proposed by Sen. Steve Hobbs (D, 44th District), and would raise $18 billion through a 9.8 cents per gallon gas tax increase which is estimated to raise an additional $5.2 billion over 16 years. The plan would also dip into the 6.5 percent sales tax on sales of electric vehicles, and use $1 billion in federal stimulus funding.

Yet House Transportation Chair Jake Fey (D, 27th District) described the transportation package as just the opposite of a bare bones proposal in January. “Our proposal is much more substantial than any in state history because the needs and challenges are so much bigger,” said Fey. “Those needs include long-overdue investments in preserving and maintaining our current transportation system, help for frontline communities, and carbon reduction to fight climate change.”

The Senate bill includes initial funding for the Interstate Bridge replacement project along I-5, as well as the SR-14/West Camas Slough Bridge, money for capital improvements along the Chelatchie Prairie railroad, and a widening of East Fourth Street in La Center.

A larger bill put forward by Fey in the House, would raise $22 billion. It would also use American Rescue Plan funding but include a much larger gas tax increase of 18 cents per gallon. Both plans include funding for a future mileage tax program, which could cost up to 2 cents per mile driven by 2025.

The Miles Ahead plan, as the House bill has been dubbed, would also include funding for the Interstate Bridge replacement, the SR-503/502 intersection improvements in Battle Ground, as well as a 54th Street bike/ped crossing bridge, some funds for the Chelatchie Prairie Railroad, and more.

Both the House and the Senate plans include a carbon tax to raise revenue in addition to a host of other taxes. Some predict the price of gas could rise by $1 per gallon as gas taxes, the Low Carbon Fuels Standard and the carbon tax would cause sticker shock for average citizens.

When the bills were introduced in January, Rep. Vicki Kraft (R 17th District) shared the following. “This tax will raise the price of gas (taxes) to 85.4 cents per gallon and if carbon fees are added will cost $1 per gallon.”

“It’s clear to me this bill will punish drivers who have vehicles using gasoline,’’ Kraft said. “Ultimately, this furthers the agenda of the Democrat majority in Olympia to get people out of their cars and depend instead on public transit or rail.”

Ransom said he has been in contact with both chambers in Olympia, simply to confirm that these projects are on RTC’s list of priorities, with one alteration.

“They refer in the project list to Mill Plain BRT (Bus Rapid Transit), we understand that C-TRAN is actually working to shift that over to Highway 99 BRT.”

There has been no mention of bumping up the funding timeline for the I-5/179th Interchange project, which is currently slated to have funding starting in 2023. The 179th Interchange was funded in the 2015 gas tax package, so its funding is not contingent on any new taxes. It’s already “paid for” unless the legislature elects to move that funding.

Ransom noted that a practice known as “earmarking” is set to make a return at the federal level as a means of gaining republican support for Biden’s infrastructure plan. While criticized by some, earmarking allows lawmakers to seek funding for pet projects as part of a funding plan.

“There’s a range of opinions about those,” Ransom admitted. “But I think when it comes to securing dollars as we have over the decades here within this region for capital investment, that’s a pretty great opportunity from my perspective.”

“We’d likely expect to see that kind of flow through funds for regional flexible allocation,” he told the council, “and then also other maybe one time grant opportunities that would be available, as sponsored by USDOT.”

The mileage tax, or road usage tax being proposed by the legislature is not without controversy. Many citizens feel they already pay a road usage or mileage tax, via the gas tax. The more they drive, the more gas they buy and the more taxes they pay.

Senate Bill 5444 would require the Washington State Transportation Commission (WSTC) and state Department of Licensing (DOL) to create a plan for implementing a Road Usage Charge (RUC) on electric and hybrid vehicles by December 1, 2022. Many fear this electric or hybrid RUC would be the camel’s nose under the tent, and gas and diesel powered vehicles would be taxed next in addition to them paying the gas tax.

The Washington Policy Center (WPC) reports the legislation is “premature given the artificial cost-drivers officials impose on transportation projects.” These government barriers should be eliminated before imposing a new tax on the public according to the WPC.

Owners of electric vehicles pay $150 each year as a gas tax offset. “If lawmakers feel that is too low, they should consider raising it, rather than imposing a new and administratively costly tax to replace it,” says the WPC. They also say privacy protection is a critical element of the RUC, so any potential data vulnerability should be corrected before imposing a RUC system.

Near the end of the meeting, Ransom offered a variety of comments he believed would be of interest to the RTC Board as part of his legislative update. He specifically mentioned $600 billion for highway and transit in the Biden American Jobs Plan proposal. “It’s a lot of money,” he said. He later added: “this is pretty significant.”

He shared that the state legislature has advanced bills on Tax Increment Financing (TIF), which he called “most profound”. It becomes another tool for seed money for transportation and infrastructure projects. “I think it’s significant,” he added.

HB 1189 has now been passed by both the House and the Senate according to the legislature’s website. This would be a new tax that according to Ed Orcutt, (R 20th District) would allow governments to bypass the 1 percent restriction on property taxes in the state Constitution.

Ransom mentioned discussions regarding oversight and governance on bi-state projects, specifically citing the bridge replacement project for the Hood River bridge. The towns of Hood River and White Salmon are on opposite ends of the bridge and seeking a way for each to have reasonable input and oversight of the bridge once replaced. That is of interest as there have been discussions about creating some type of quasi-government organization to oversee Portland-Vancouver transportation area projects in the future.

At the end of his remarks, Ransom mentioned that Woodland is beginning “back of the napkin” talks and planning for a possible arterial “west of I-5”. They apparently want to evaluate future traffic demands for a “Woodland Vicinity Arterial Study”. Since they are in Cowlitz County, their major transportation organization is not the RTC, but managed by Cowlitz-Wahkiakum Council of Governments. Apparently Congresswoman Jaime Herrera Beutler has had a meeting with local officials about this.

Also mentioned was Metro (the regional 3-county government body in Portland) has conducted a “Regional Congestion Pricing Study”. This lays the groundwork for potentially charging variable tolls to drive on all metro area highways and freeways. There will be a public presentation/hearing where five “experts” discuss congestion pricing on Thu., April 22 from 7:30 to 10 a.m. 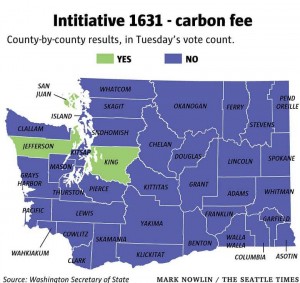