End Times: A Brief Guide to the End of the World
by Bryan Walsh 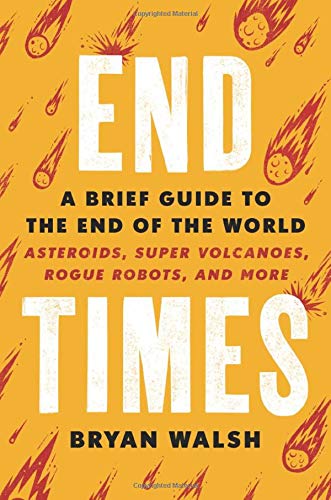 Grow out your apocalypse beard and strap on your doomsday sandwich board, we’re all gonna die! Humanity has always lived on knife edge, our species perpetually one war, one plague, one eruption, one meteor strike away from extinction. But should our species kick the bucket during the 21st century, it may well be through our own actions.

End Times by Bryan Walsh takes an unflinching look at the myriad ways the world might end — from planet-smashing asteroids and humanity-smothering supervolcanoes to robotic revolutions and hyper-intelligent AIs. In the excerpt below, Walsh examines the work of environmental researcher Klaus Lackner and his efforts to combat climate change by sucking carbon straight from the air.

It might be the German accent, but Klaus Lackner has a way of speaking that lends an air of authority to his statements, even when what he’s suggesting seems to be science fiction. “If you asked me fifteen years ago,” Lackner told me from his lab in Tempe, Arizona, “I would have said we need to figure out how to stabilize what we’re doing to the atmosphere by reducing carbon emissions. Now I’m telling you we’re way past that. We have to change carbon levels directly.”

Lackner is the director of the Center for Negative Carbon Emissions at Arizona State University and an academic leader what will be one of the most important fields of the future: carbon capture. Lackner is working to build machines capable of capturing and storing carbon dioxide in the air, a process called carbon sequestration. While most climate policy focuses on cutting future carbon emissions by replacing fossil fuel energy consumption with zero-carbon renewables or even nuclear power, Lackner aims to reduce current levels of carbon dioxide directly by sucking the gas out of the air. If it can be done — and if it can be done affordably — it would be nothing less than a technological miracle. And as Lackner himself says, we’re at the point where we need miracles.

Emissions of greenhouse gases lead to warming because over time they add to the carbon concentration in the atmosphere. During humanity’s pre-industrial history — when the climate was like Little Red Riding Hood’s last bowl of porridge, not too cold and not too warm — carbon levels were around 280 parts per million (ppm). By 2013 they had passed 400 ppm and will only continue to rise. Even if future emissions are vastly reduced, the time lag of man-made climate change means that carbon concentrations will continue to grow for a while, and the climate will continue to warm. But if Lackner’s invention works, we could bring carbon levels down, perhaps closer to that original 280 ppm — even if it proves politically and technologically difficult to reduce carbon emissions from energy consumption.

This would be geoengineering in action — using technology to manually fine-tune the climate, the way we might adjust the picture quality on a television. And in some form it will be necessary. The UN’s Intergovernmental Panel on Climat

An Exhibition To Warn About Climate Change

« Sadness is a no gO-Zone », is a free-to-attend show at The Copeland Gallery features unique pieces from fifty European artists to raise awareness about the biggest issues facing the planet. Organized by Adapt, a team of volunteers and artists, the exhibition is a mix of various creatives intepretations of climate change. A beautiful way to…

Europe is at an environmental tipping point, says report

Europe is at an environmental tipping point which threatens its prosperity and the risks go beyond the consequences of human-induced global warming, according to a European Environment Agency (EEA) report. An alarming rate of biodiversity loss, increasing impacts of climate disruption and over-consumption of natural resources means “Europe faces environmental challenges of unprecedented scale and…

Sweden’s environmental education is building a generation of Greta Thunbergs

STOCKHOLM — That 16-year-old Greta Thunberg became the face of climate change action may have taken the world by surprise, but in Sweden, young people have long been champions of the environment.While Thunberg made her way to the United Nations climate talks in Madrid earlier this month, students at an elementary school in a suburb…